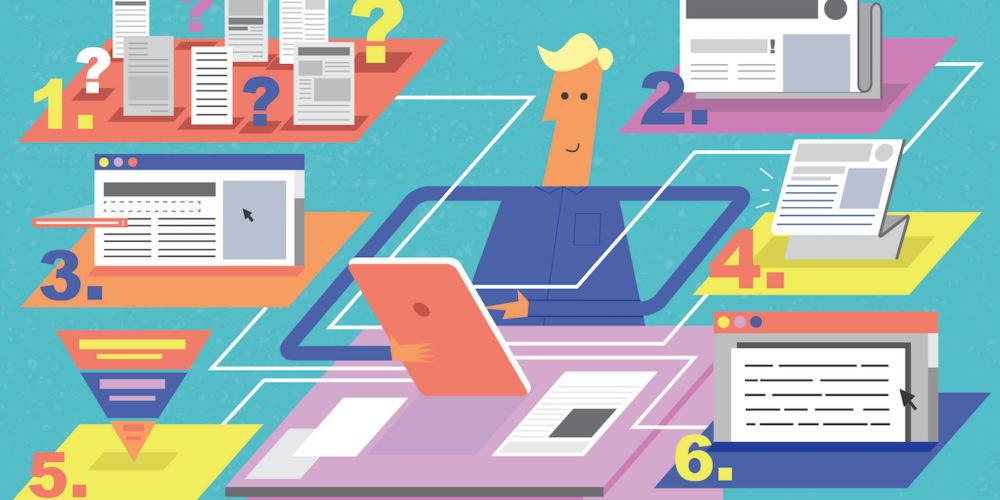 Savvy businesses use press releases as part of their marketing strategy to take advantage of having their content promoted by a trustworthy, reliable source. Because readers understand that news is held to a higher standard of integrity and factual content than is paid advertising, publicity – also known as “earned media” – is an effective and affordable method of promotion that can reach consumers who tend to ignore advertisements in lieu of traditional news and feature articles. Anyone can write an effective press release, you just have to learn to see your content from the journalist’s perspective. Follow these tips to create an effective press release that journalists and media outlets will recognize as content worthy of publication.

Savvy businesses use press releases as part of their marketing strategy to take advantage of having their content promoted by a trustworthy, reliable source. Because readers understand that news is held to a higher standard of integrity and factual content than is paid advertising, publicity – also known as “earned media” – is an effective and affordable method of promotion that can reach consumers who tend to ignore advertisements in lieu of traditional news and feature articles.

Writing an effective press release requires adhering to the same standards as journalists: your release must be truly newsworthy, meaning its content announces a new business, product, service, staff member, or provide other information that is new, interesting, unique, or promotes accomplishments or a specific, verifiable, milestone.

To write a successful press release, you need to think like a journalist. Following are six tips to help you produce a newsworthy press release that will garner news coverage and reach journalists and readers that advertisements often miss.

Follow these tips to create an effective press release

What makes your announcement newsworthy? What is the most important fact you’re trying to get across? Why should readers care?

Answer these questions and you have begun the process of creating a press release that will appeal to journalists, editors and digital content curators. Thousands of press releases are competing for journalists’ attention every day, so it’s important to take the time to determine the most newsworthy elements of your announcement, and be sure to feature this information in the headline, summary and lead paragraph of your press release.

Include as much information as possible in 50 words or less. The goal is to summarize the entire article factually – not sensationally – to immediately attract the attention of journalists whom you would like to use your press release as the basis for an independent article. This is not an advertisement, it is a news article, so do not use any advertising-style words like ”the best” or “the newest” unless you can site a credible independent source proving this assertion. There is no room for opinion or hype in a press release; journalists are expecting you to provide newsworthy content that is well-researched, well-written and provides all the details they will need to write their own article without further research. This is why you must include links to your website and other published press releases within the body of your release.

An effective headline is the first step toward garnering the attention of journalists, editors, content curators and, eventually, the reading public.

3. Summary (or sub-head) offers another chance to attract attention

The summary, or sub-headline, is a second opportunity to present important information and bring additional context to the short-but-sweet headline. Don’t simply repeat the information that is included in the headline; instead, provide additional newsworthy facts that will compel people to continue reading. Here’s an example of the summary for the news release that follows the headline listed above:

4. The “lead” paragraph needs to summarize the article

The first – or “lead” – paragraph is expected to detail all of the pertinent information included in the press release. It must provide answers to the six basic questions all news articles include: Who, what, when, where, why and how (known by journalists as “the five Ws and the H”). All these questions should be answered in the first paragraph, in 50 to 65 words contained in two to three short sentences, without any hype or sensationalism. Make sure to include the reason this announcement is newsworthy today; it must announce something new or different. Following is the lead of the press release that accompanied the headline and summary noted above:

“SAN JOSE, CA — Apple today previewed tvOS 12, the powerful operating system designed for enjoying entertainment on the big screen, which takes the cinematic experience of Apple TV 4K to the next level with support for Dolby Atmos audio, convenient new features to easily access the shows and movies you love and breathtaking aerials shot from space.”

Journalists are trained to write in what is known as “inverted pyramid” style. The inverted pyramid is a traditional news reporting style designed to communicate the most important and relevant information at the beginning of the news story and information of diminished importance as the story progresses.

In the past, news had to be communicated in a set number of column inches or read in a particular number of seconds. Because of this, it was important to have all the most relevant information up front, so only less-important information would be left out if the story was cut by editors. 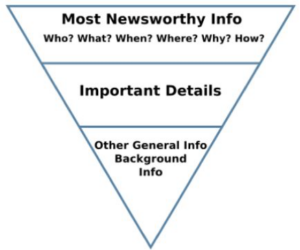 News articles always follow a strict style, the most well-known of which is described in the Associated Press Stylebook and known as “AP style.” Because the specific guidelines delineated in AP style differ from the traditional business English taught in college, it’s a good idea to research the differences and make sure to use not only the proper style, but also perfect grammar and punctuation.

Some notable differences between business writing and AP style is the use of commas and quotation marks, as well as numbers and quantifying terminology.

Specifically, AP style does not use the “Oxford comma” – meaning the comma that follows the word and. All necessary punctuation is included within, rather than following, quotation marks. Numbers lower than 10 are spelled out, while larger numbers are expressed in numerals. For example: “Seven people (not 7) were awarded $2 million each in today’s prize drawing,” or “$2 million prize awarded to 15 winners.” If a number is the first word of a sentence, it is always spelled out fully: “Fifteen winners each receive $2 million.”

The terms below, under and less than are not interchangeable; below and under are spatial references – “the mouse was under the bed” – and the terms less than and more than refer to countable items – more than 10, less than $1 million. The only thing that can be under $1 million is the table the cash is placed upon. Also note the correct verbiage is “$1 million,” not “one million dollars,” “1 million dollars” or “$1,000,000.” Although there are a number of different ways to present this information, only one way is correct based on AP style. Professional journalists immediately notice the difference.

Adhering to AP style will show journalists and editors you are serious about providing newsworthy content, and can result in more pick-ups and publication than an article written using standard business-English style. To write a successful news release, familiarity with AP style is essential.

Even a well-written press release is effective only if it reaches the right journalists and media outlets. A variety of targeted distribution options are available; clients can select Faselis Growth, which reaches a pre-screened list of media covering specific industry, national and regional journalists, or the unlimited Faselis Corporate package, which allows clients to create their own lists, add video and image attachments and design reusable email templates to reach an unlimited number of industry, national, regional and local journalists and media outlets.

April 19, 2021
Next Post
How to get the most out of quotes: Press Release Tip